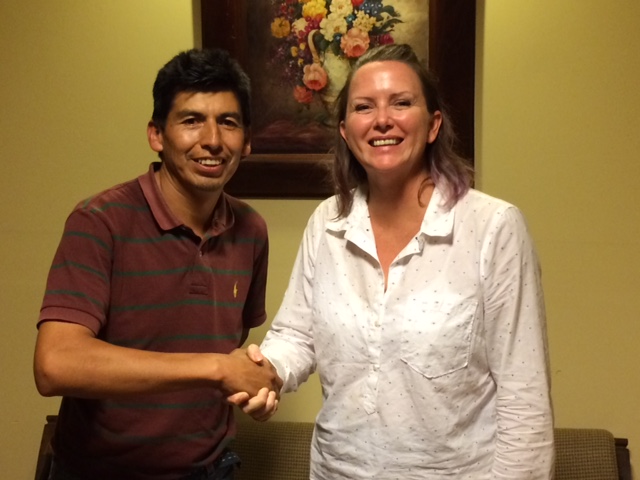 “I do these trade missions all the time, but this one is different”

Ricardo Romero, Director of the Trade Commision of Peru is a slender, spectacle wearing man with a demeanor that at first appears reserved and studious, but eventually his strong opinions and genuine character slip out. He is what some young men might describe as “legit”. With the help of Jeff Chean of Groundwork Coffee, he organized this trip, designed to connect Peruvian coffee farmers with coffee roasters in the USA. According to him, he learned about an industry that is different from others that he actively supports within the context of his important role. Listening to the farmers, his presence and attention was meaningful and a huge honor. The Trade Commission had never done this before. Not for the coffee coffee farmers. As we bounced and rumbled up and down mountains and over partially washed out cliff-side roads this bureaucrat was clearly not at all phased, but rather, observant and alert. 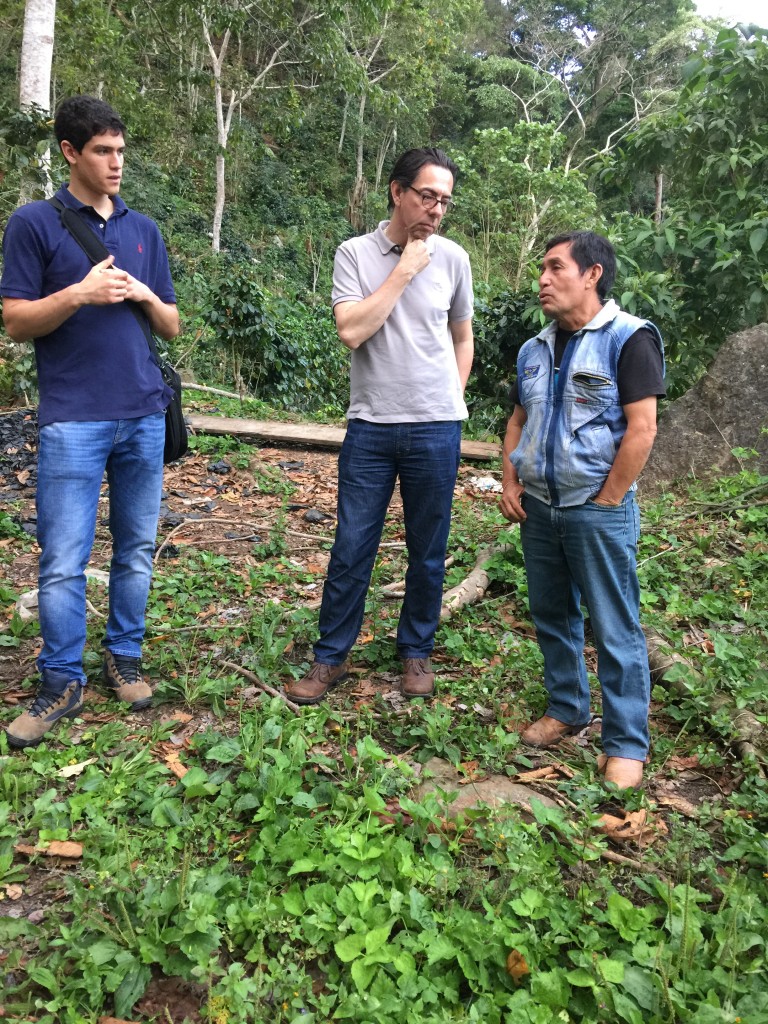 Ricardo Romero, with Andres another representative of the Trade Commission learning about Finca Santa Maria, a member farm of Coopertiva Cunavir.

On every farm we toured, and over the course of so many extremely rough rides up and down the mountains, Mr Romero provided the farms genuine interest. He provided an influential ear for their voices, and a respectful audience with the potential to help address some of their concerns. Visible interest from the government was seen for the very first time, and though he was clearly very familiar with the big picture of coffee in Peru there was still so much to see in context and in person.

I like to read into things that may or may not be fully real, but I  believe that seeing the many competent and hard working producers on these farms and cooperatives provided a meaningful contrast to the millionaire single owners involved in some other agricultural industries. Supporting these smaller business people is a worthy investment, and I am hopeful that Peru is up to the task.

This specific trip focused specifically on West Coast roasters (there will be another trip for the East Coast crew). Along on the trip were Chris from Nossa Familia Coffee, Justin from Portland Roasting Company, Jeff from Groundwork Coffee, Andy from IPcoffees, and I attended as a representative of Swell Coffees.  All three sides learned valuable information about each other’s processes and needs. I found new trade partners. Everyone left feeling good about the project and the potential for growth of relationships. 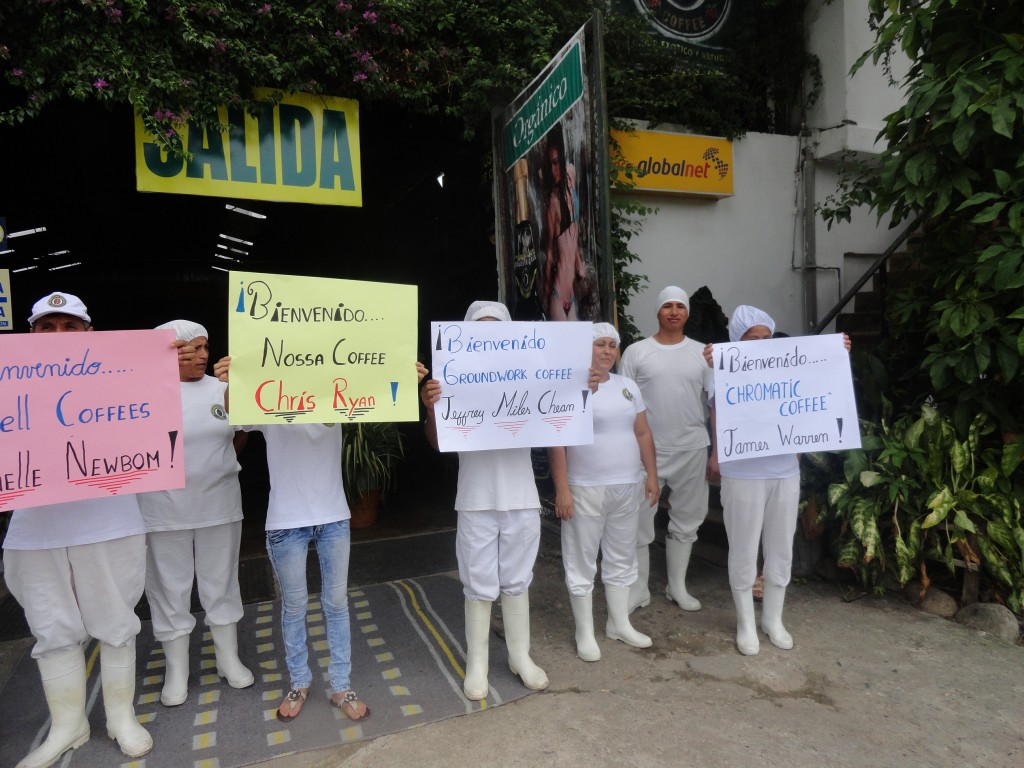 The crew at Chanchamaya welcoming us warmly! We felt very honored!

Over the course of the mission we visited 6 farms, 4 wet mills and three dry mills. Of those farms, one was independent and the rest were members of cooperatives. I learned more about how cooperatives function and became more comfortable with the idea that one can still form a meaningful partnership with a coop, or one of its member farms. I also learned that it does take extra questions, and extra work to be sure the buyer, the farmer and the mill are all fully in agreement, and also fully equipped to accommodate the odd customization requests small US roasters take for granted as a matter of course in the specialty sector. Of importance to this and every trade mission or coffee sourcing trip, is the fact that there is no substitute for meeting face to face, for walking the farm, walking the mills, and coming to a realistic agreement.

So what are these agreements that coffee people are always waxing poetic about? Where is the value of direct trade and in all this travel? Those are great questions I will try to address in an example below. 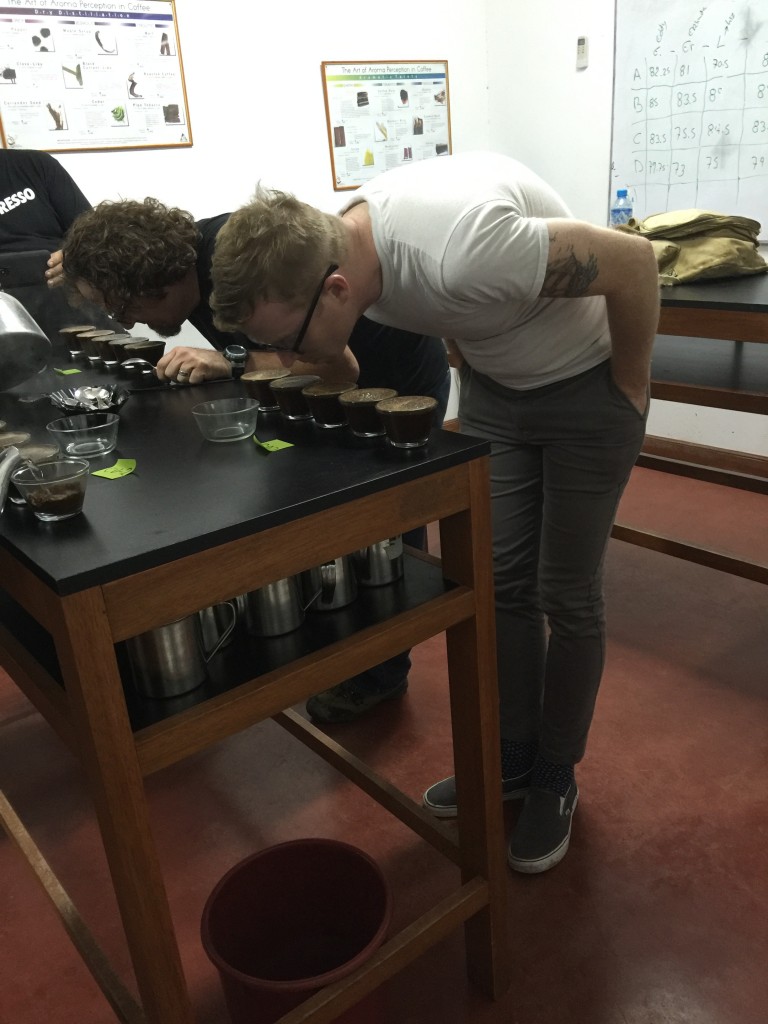 Cunavir cooperative is one of those cooperatives that we visited, and is an example of an agreement that required a level of mutual understanding, and some cooperation from both sides. Because Cunavir is a cooperative, many of their coffees are blends and harder to nail down than individual lots on an individually owned farm. It took a little work to find out what the blends consisted of, and how solidly repeatable and consistent they are likely to be. It’s hard for a producer to admit they might not be able to guarantee certain things!

I found out the samples we cupped were hand sorted to remove most defective beans, and that the price quoted was for a level of sorting likely less clean than what we had cupped due to challenges at the mill. Of importance is that without being physically at the mill, I might never had thought to ask some of those questions. Without me asking those questions the cooperatives representative might not have realized what my actual needs were for that coffee. Eventually, we came to a balanced solution. That’s one value of being there. Its not just about co-designing custom coffees, but about problem solving that saves everyone time and money sometimes.

Another benefit of direct trade is that it gives a buyer a context for prices. A buyer can literally see what goes in to getting coffees to your cup and this helps us make a better choice in the negotiating process. Further, direct trade gives the opportunity to participate in improvements in a way that is harder to do when working with an importer. For many roasters, it is the long game that counts much more than carving a few pennies per pound off the total. Its that stable relationship that provides solutions for the problems of people on both the producing and consuming ends.

This Trade Commission of Peru trip facilitated direct trade, and opportunities for relationship building. We all gained alot. For that I am grateful. In the next few articles I will feature short bits about some of the highlights. some of those include

For me it was a very successful trip. I purchased one lot of 93 point coffee on the spot, and made preliminary arrangements to buy a larger quantity of very solid organic fair trade coffee with a good chance of a long term relationship. For the Trade Commissioner?

“My boss she always wants me to tell an exact number of how many millions of dollars did this trip bring. My colleagues might give a number, but I never produce a number because I have no way of knowing. I cant know. It’s impossible.”

He never asked me how much coffee I purchased as a result of the trip. I think he is also most concerned with the Long Game.