“This is the mother tree!”

Gustav Villa, the enthusiastic farmer was pointing at a particularly tall and lovely coffee tree up the slope from a winding path along side semi-separated sections of the coffee farm. We had just walked past a section of the farm that held the shorter Caturra variety. The Mother stood out, tall and elegant, appearing to look down the hill at her children.

As Gustav indicated a tablon consisting of exclusively the offspring of this gorgeous Mother Tree, we all went into sleuth mode, looking at the leaves, the angle of the branches, the smoothness of the bark, and growth patterns. “Maybe” said someone off to the left. “This looks like Typica, except for the bark. Then again its pretty thick!”. “It’s so tall!”. Few things get coffee roasters more excited than the thought of a new coffee variety. Curious faces leaning in to the trees, cameras snapping. Both questions and guesses buzzed in the air. None of us are agronomists, but we all imagine ourselves on another level in these situations. 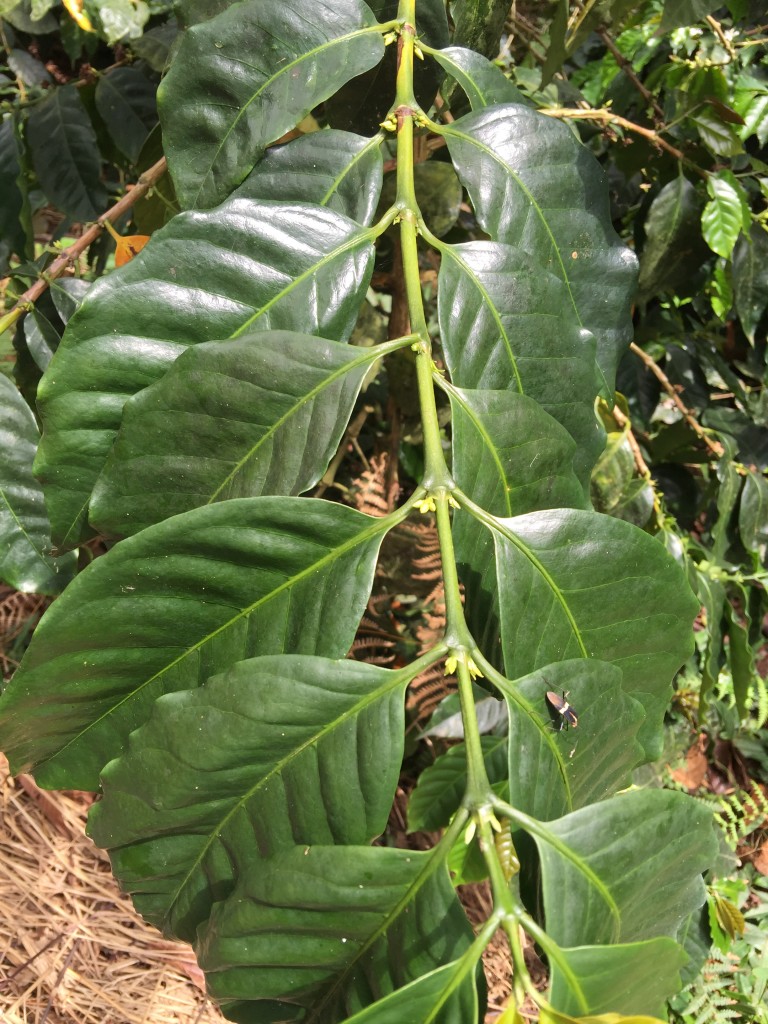 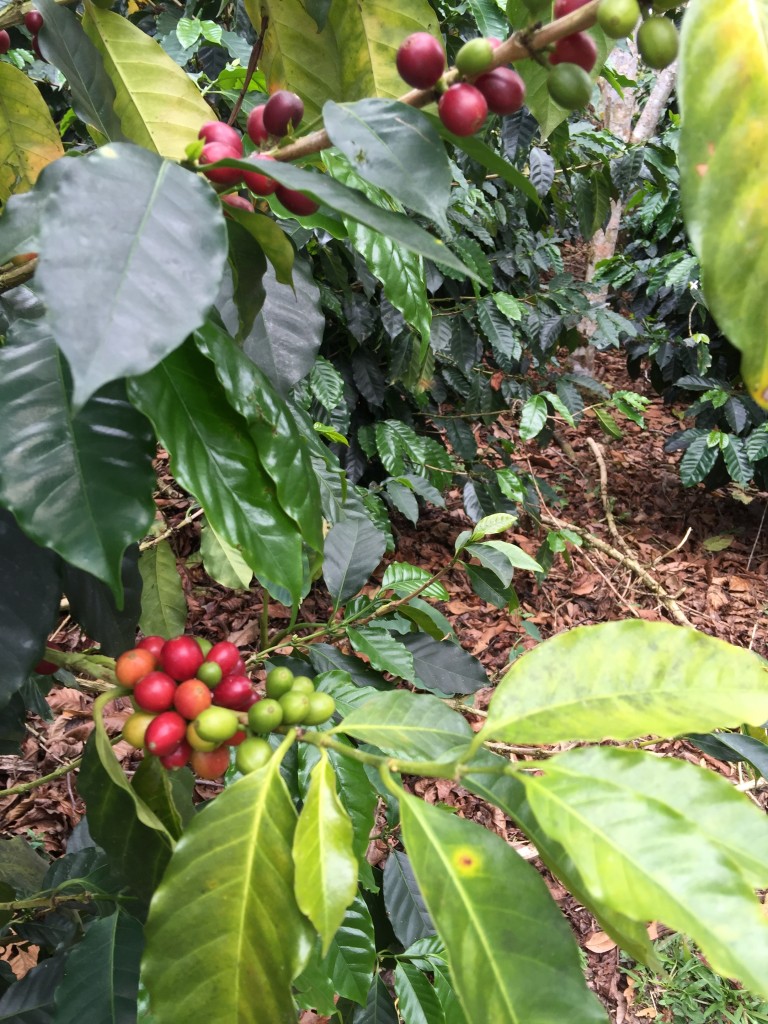 Cherries from a nearby tree, ripening a bit late for the harvest 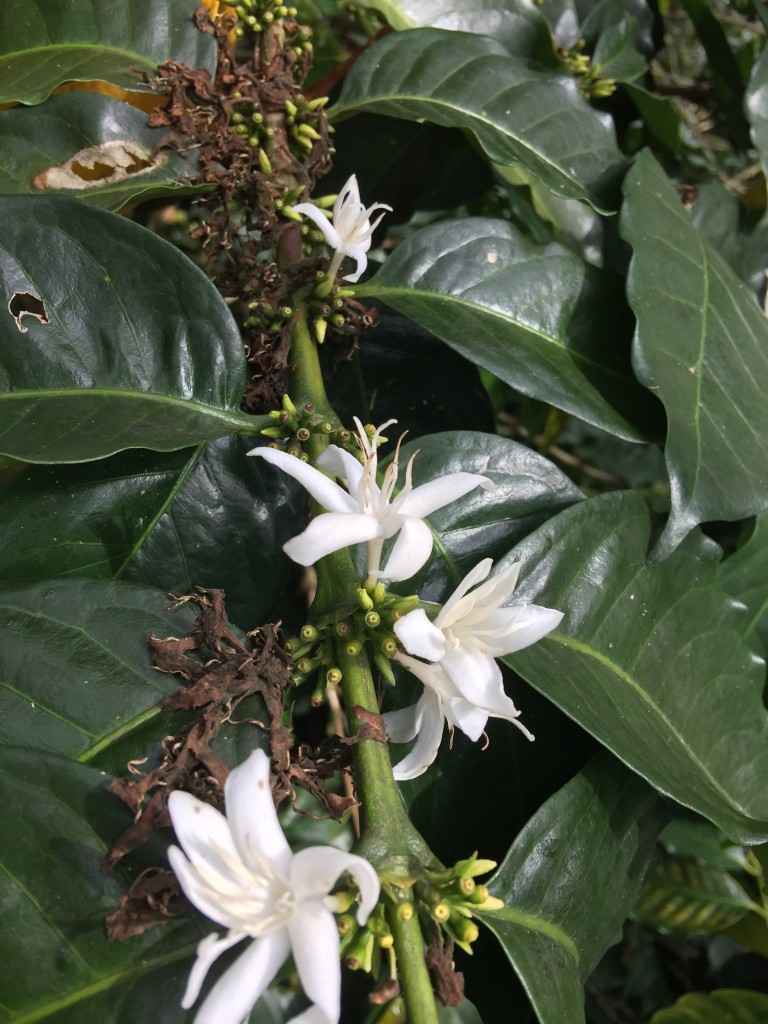 Coffee flowers. Coffee smells a bit like a cross between jasmine and honeysuckle.

Finca San Vicente is named after the father of 8 boys and one girl. That girl, Rebecca Villa, now runs this farm, along with her brother Gustav, and based on the appearance of the farm they are pro-active, and take opportunities to experiment and to adapt. Like many farms in the region, San Vicente had sections that were hit hard by Roya, also called coffee leaf rust, a fungal disease that can devastate both quality and production on an affected farm. Based on what these farmers were saying, it seems that La Roya is not just a destructive force, but also an agent of change.

Out of a field of devastated Caturra, rose The Mother, unaffected and strong. Much of the replanting of fields I have seen has been with hardy hybrid stock selected for hardiness over flavor. Don’t get me wrong, there are plenty of hardy and delicious coffees, and delicacy does not mean deliciousness. What Rebecca and Gustav talked about with regard to this possible new variety, was a great balance of yield, flavor and disease resistance. Because they both believed The Mother to be a new mutation, they have enlisted the help of agronomists to verify if The Mother is an old variety that appeared on the farm, a new mutation, or a known variety that just popped up on the farm. As a buyer one of my primary interests is if it tastes different. Can I tell it from the typica, caturra and comun on the table? 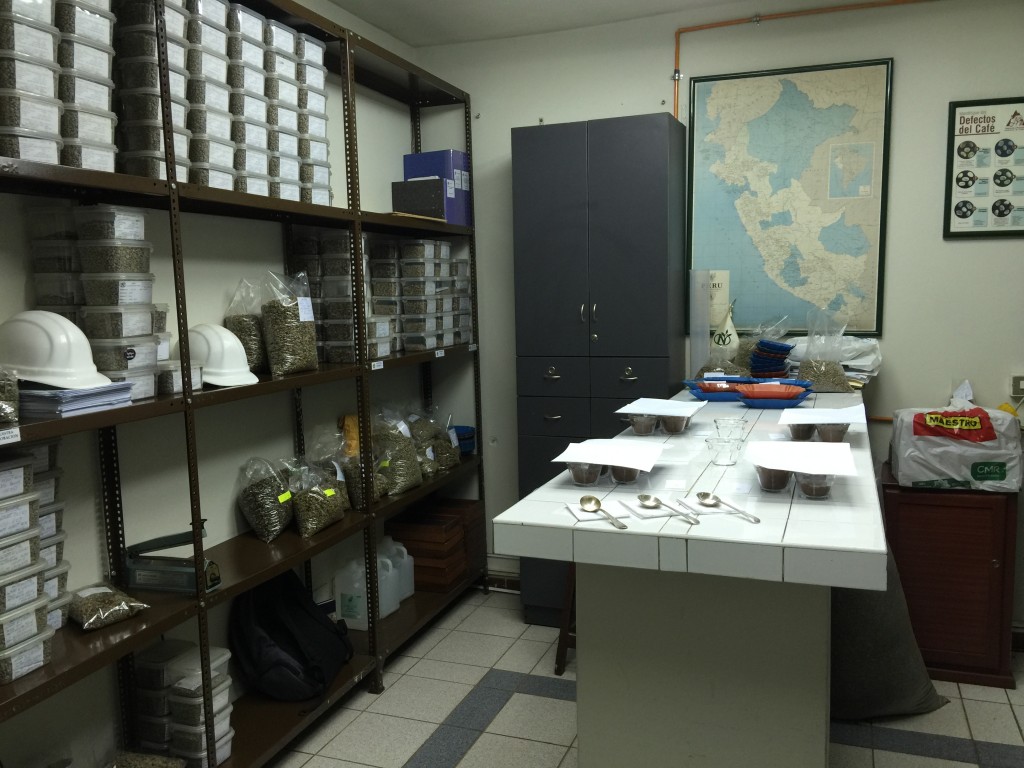 This is your basic wall of samples. In order to compare coffees, we need samples for the cupping table! The cupping table is where the real work for buyers comes in. We aren’t scientists, we are sensory!

We found that San Vicente had its own flavor that was distinguishable from others on the table. In a blind cupping wherein 2 out of the 6 coffees were the San Vicente variety, but all coffees were from the same cluster of farms I can honestly say I could tell which two were different from the others. My notes included tamarind which is not a common cupping note. I am currently trying to purchase a lot of San Vicente for Swell Coffees to present. I think the customers will enjoy it!

But back to the farm itself, it is 90% shade grown coffee, but they are experimenting with machine picking to see how much it affects quality. I gave my opinion of course, but I am not the person who has to balance their books. Coffee is expensive to produce. A farm has the tough choice of either reducing cost or finding buyers willing to pay more for quality, so power to them for trying to balance on the rock next to the hard place. This farm is diversifying. 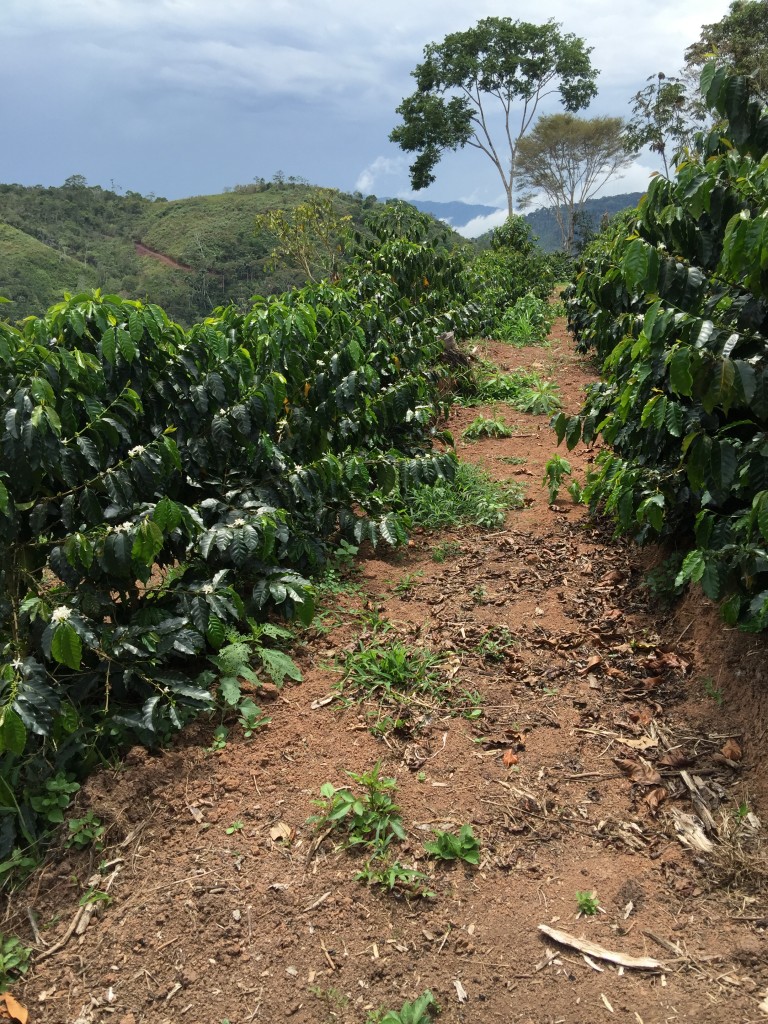 In order to experiment with machine picking, they have planted a few tidy rows of plants on one of the more evenly slanted hills. the straight and even rows allow one to run a machine down the row to pick the fruit.

In this picture you can see that this coffee is grown in the sun rather than the shade. Shade trees would interfere with the machinery, so machine picked coffee tends to be grown in the sun.

More importantly, because specialty buyers are not always willing to pay the premium to cover the costs for all the processes they would like to see in place, farmers eventually have to cut costs. I guarantee that for a farm at this elevation, and with the level of overall enthusiasm from the producers they would not be experimenting with machine picking if buyers were willing to pay for what they are asking for.

This is what happens when people want free refills. A farm reduces its labor cost. As you can imagine, when farms reduce labor costs by turning to machines, the surrounding area loses jobs.

I am all about this farmer doing what he needs to do. Producers produce what we ask for. If we are asking for cheap coffee, that is what they will give us, particularly in a commodities market so depressed by speculator manipulation.

Of the experiments going on at San Vicente I am most excited about the potential new variety. I was also excited to see them very receptive to increasing yield using some older methods that are very appropriate to the structure of the tall and flexible tree. After a lengthy conversation with a member of our group Rebecca was interested in attempting Agovio Para, (or Doblar Sombrilla in Peru) a very old technique that helps reduce the number of root systems on a hill, while effectively increasing the number of trees. I know right? sounds backward, but I assure you it isn’t.

For the customers at Swell, I hope to be bringing you some San Vicente to try! I plan to pay a little more for it, because that is the price of keeping the trees shade grown and hand picked, and to make sure these tall and lovely trees remain on that hill. Look For San Vicente in early December, just in time for all kinds of fabulous warm cups of loveliness.