I’m always wide eyed and a little too interested in every place I go. Its a habit, whether good or bad. I fall in love too easily, over and over again. On this particular trip Bogota was a too much for my puny little brain, but Medellin was intoxicating, lovely and just about perfect. Several people told me I never saw the good part of Medellin and I never saw the bad part of Medellin. Probably for the best. I will go ahead and nurse this teenage crush I have on the city for a few while. Don’ t tell Apaneca! 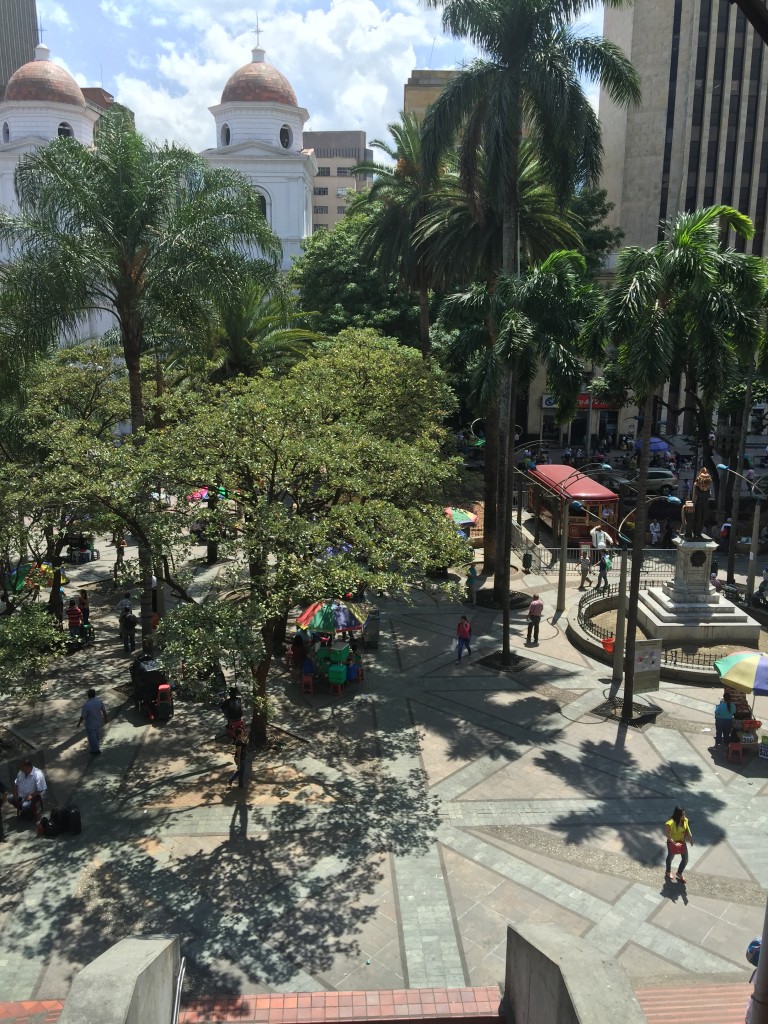 This is a view from a metro platform in the Centro of Medellin. Medellin is in Antioquia a high producing coffee region working to strengthen and develop its distinct specialty coffees.

My first stop in Medellin was with Tusa Specialty Coffee. It’s easy to admire people who make the leap to live in a new country, whether they are coming to our own country to join this great brand of crazy, or leaving the US borders to live and create something meaningful in another country. Its hard enough to carve out an interesting nook in the  neighborhood you grew up in!

I had the good fortune to meet a collection of like minded coffee obsessed expats from three different countries, now living in Medellin, and apparently living something as close to my version of a coffee dream as I can imagine. They are a small business, but exude such vibrant energy that I can see why quality farmers would want to work with them. I can also see why farmers on the fence about which direction to go with their coffees would be drawn to this groups focus on 86 point and up coffee only, and their willingness to make meaningful commitments. 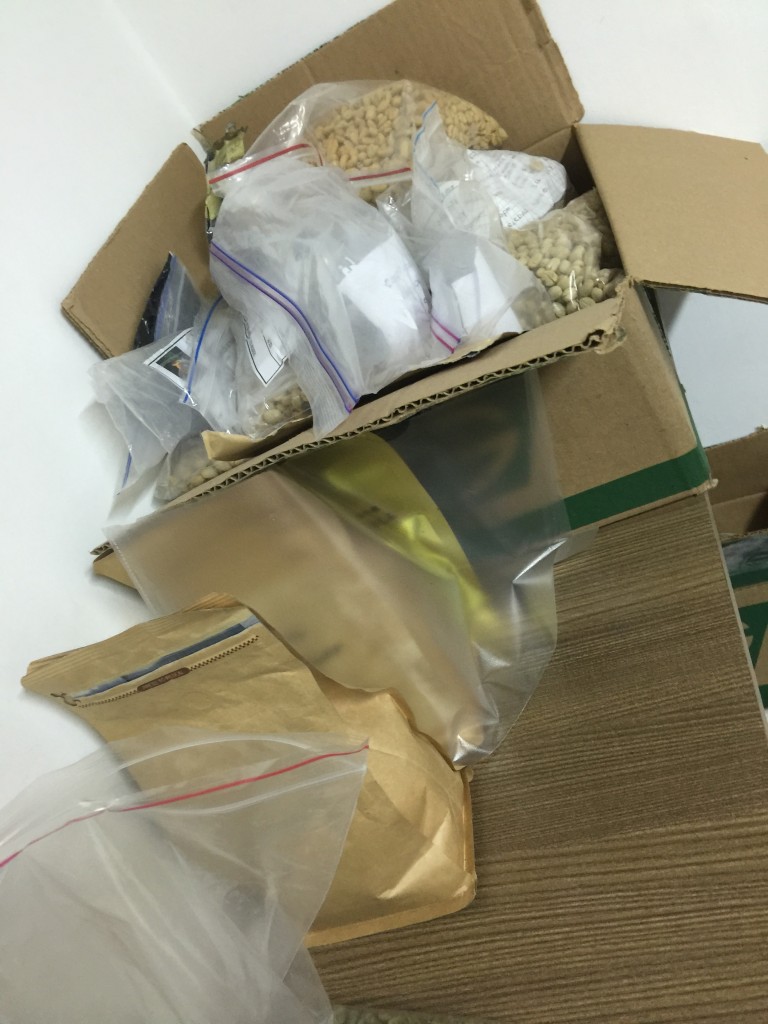 Samples Samples Samples. Parchement samples, green samples, natural samples. To get the ball rolling nothing works like a solid sample with a note you didn’t expect, or with a personality of its own.

We in the Specialty Coffee sector talk a lot about how great it is for farmers to focus on quality. Sometimes asking the farmers to make change, means taking the leap with them. Committing to purchases you aren’t certain of, getting yourself out on that same shakey limb you are asking the producer to walk. I firmly believe the party line. I drink the Kool Aid because I sell the Kool Aid.

What is clear from the energy in the Tusa office is that the group here understands both short and the long term gain, and has a clear view of not just the craft and science of production but the economic web they are a part of. I think this is why at their tiny size they have an impressive set of coffees on the table. Truly, there were some stunning coffees. 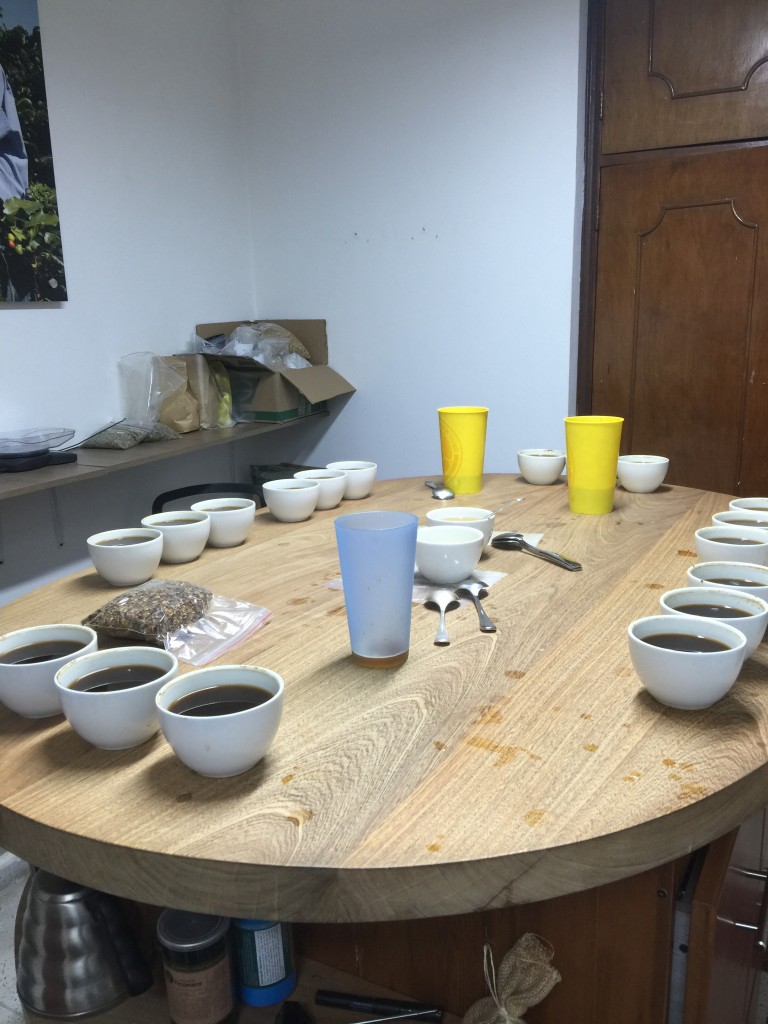 My favorite on the table above was a coffee from Narino produced by Lucas Melo, a producer known well to the Cup of Excellence circuit. An easy 90 point blend of molasses and sprite (who knew THAT would be a great combination) this coffee blew me away. Its presence on the table was a dirty trick of course, because its sold out! A second stunner was a heavy bodied example of an extended fermentation process from the Planadas region that produced deep raisiny fruit flavors and big freakin body. SOLD OUT. A third peachy little dreamboat from right up the hill, studded with cashew and almond sweetness? One bag left.

Well kind of, but not really. Its about finding and developing partnerships for ongoing work. Its not about about any one lot on any specific day. So this was a productive day. Plus I found something really really important! 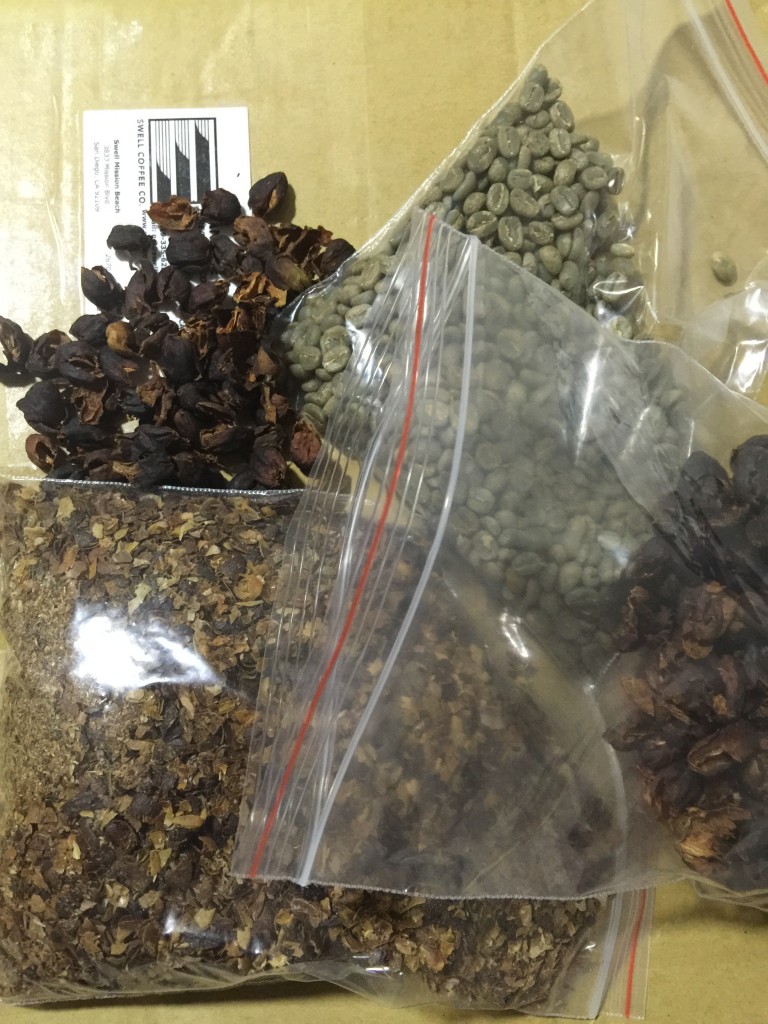 I have horrible luck finding cascara. Its always gone. I can reserve it, try to buy it early, call around…whatever. But on this golden day, I found someone who just nodded and handed me a bag of really sweet and juicy coffee fruit love!

I love Cascara, and not every producer has any interest in drying the coffee pulp to sell it. They usually compost it and use it on the farm. I have found that my customers love it when its available, which is almost never. It makes great tea! Just throw some in a french press with hot water and viola! It was cool to see that on that table, there was coffee from a well known Coffee Rockstar producer, as well as from farms just turning the corner toward producing more interesting coffees. All of them impressive in their own right. All in the hands of this very small group. This speaks volumes about where they are headed. 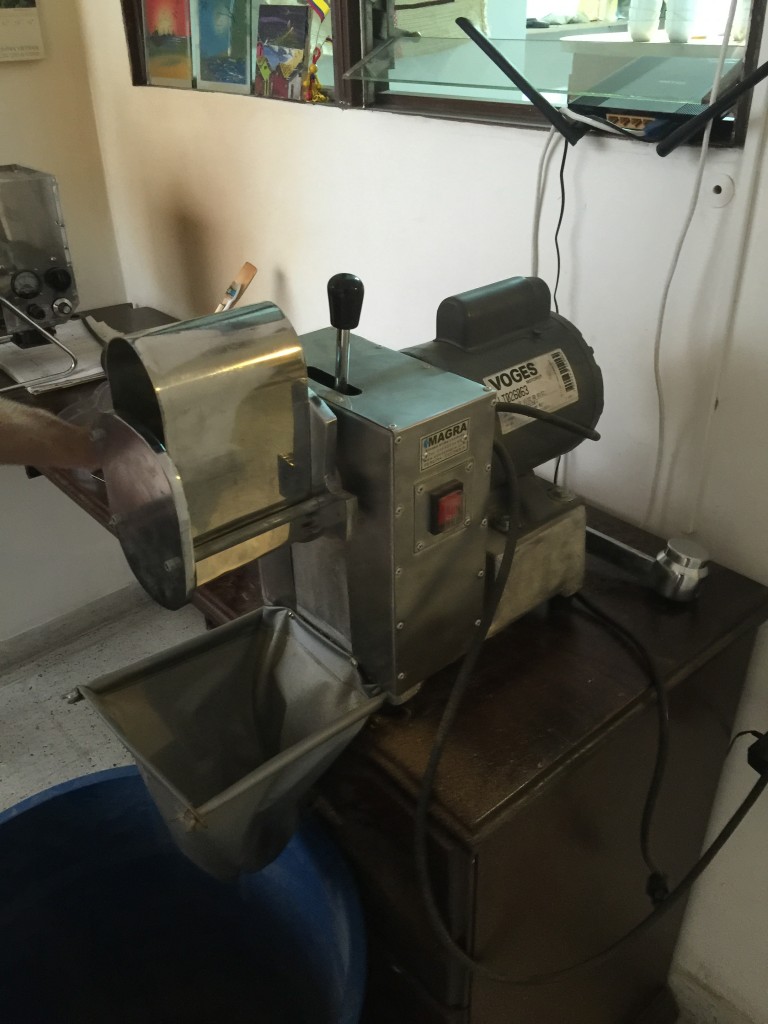 This is a sample sized triadora. It removes parchment from coffee samples. It gets plenty of work in this office and I expect it to serve this group, and their partners well!

I look forward to serving plenty of great coffees that these guys help me find! We started talks about both coffees available in limited amounts, and about what things look like for next year for the coffees that I was just a tad late to grab! Swell coffees hopes to feature some big bodied Planadas and molasses/sprite/ honeydew coffee onthe pour over bar for your drinking pleasure. It will be a few months, but we will get it done!